Sons of the Survivalist 1 - Cherise Sinclair

SONS OF THE SURVIVALIST, BOOK 1

Now the crazy ex-military survivalist who plucked Gabriel and three other boys from an abusive foster care home has died. But the sarge leaves them a final mission--to revive the dying town of Rescue.

Gabe is done with being a hero.

Wounded in body and soul, the retired SEAL simply wants to remain holed up in his isolated cabin. He sure doesn’t want to be chief of police in some defunct town. But he has his orders.

Audrey needs a place to hide

After the Chicago librarian discovers a horrendous crime, she wakes to an assassin in her bedroom. Injured and terrified, she flees, covering her trail every inch of the way. New name, new ID. New home. As Audrey learns to survive in Rescue, she begins to fall for the town…and the intimidating chief of police who protects it.

Can the shy introvert and the deadly police chief find a life together?

Despite the discord in town, Gabe is finding his own peace…with the quiet young woman who seems to have no past. She’s adorable and caring and so very lost. But how can he trust someone who lies to him with every breath she takes?

"Cherise Sinclair is my go to author when I want a satisfying read. Heat, emotion, suspense. She’s got it all." ~ NYT Bestselling author Lexi Blake

"The drama/suspense of this plot was great. It was intriguing, realistic and kept you turning page after page wanting to find out what would happen!" ~ LIT4LADIES

"This book features Gabe and Audrey and I gotta tell you, I was swooning HARD with every turn of the page! I felt their connection all the way to my bone and there was no stopping my deep desire for their happily ever after. Sinclair definitely brings the fire…the heat…the suspense! I couldn’t have asked for a better start to a new and absolutely ADDICTING romance series! I was only left with one question…how quickly can I get my hands on the next one?!" ~ Shayna Renee's Spicy Reads

"Not A Hero was a deliciously suspenseful read with a swoony romance tied in... I loved getting a taste of the other brothers (especially Hawk), and I loved the vividly quirky citizens of this little town. Everything together turned this into a perfectly blended contemporary and suspense romance. I can't wait for more in this series." ~ Dirty Girl Romance

“This was my first Cherise Sinclair book but it won't be my last! I'm seriously dying to get my hands on the next brothers story- I loved this book!! It has all the suspense and interesting characters that I expect from an Elizabeth Lowell or Jayne Ann Krentz with a wonderful dash of super steamy sex! Give us the next one, please!!!”  ~ Amazon Reviewer

In no hurry, Gabriel MacNair strolled the business section of Main Street—two blocks—reached the end, and headed back on the other side.

It’d take a while to get his footing here. Get to know the place. When visiting Mako, he’d only come into town to pick up groceries.

He was a retired SEAL, had been a police lieutenant in Los Angeles, even led a merc squad. Fuck knew, he could handle paperwork. Didn’t mean he looked forward to dealing with an entire station’s budget.

He glanced at the store he was passing, saw it was Dante’s Market, and entered. The owner was a Vietnam vet, and the reason why Mako had chosen Rescue as a place to live.

Not spotting Dante, Gabe glanced around.

Only one person was in the store, a white adult female perusing the cookie section. She had stunning hair. The thick, wavy tangle was every shade of gold and reached halfway down her back. About five-five, she wore jeans and a flannel shirt bulky enough to disguise her curves.

Before he could speak, she picked up a box of cookies and tucked it into her purse.

Well, fuck. Disillusionment washed through him. Even here, people were no good. Odd, he hadn’t realized how much he’d hoped for different until that desire was crushed.

He cleared his throat.

She spun, saw him, gasped, and began backing away down the aisle. Hand on her throat, she looked so terrified, he almost had a moment of pity.

Staring at the man, Audrey retreated as fast as she could…and he came toward her. Oh God.

He blocked the narrow aisle completely. Her heart began to pound painfully inside her rib cage. She glanced over her shoulder at the back door, but the locked door would take time to get open.

She turned to face the man. He was frighteningly big. Over six feet tall, with short brown hair. The beard shadow was darker than his outdoorsman’s tan. Harsh lines bracketed his unsmiling mouth, and he looked…threatening.

Could the hitman or his people have traced her?

A glance didn’t reveal Spyros; the man was alone. Besides, she hadn’t left a trail. People disappeared all the time into remote Alaskan towns.

No, she was safe here. Surely she was. “Wh-what do you want?”

He crossed his arms over his chest—a very broad chest. “It’s simple. Hand me everything you stole, and then we’ll go down to the station and have a chat.”

Have a chat? She wasn’t going anywhere with him. The rest of his sentence registered. Station… Oh my God, he was the police.

She stared at the badge on his black fleece-lined jacket.

Wait, what did he mean “stole”?

“I didn’t steal anything.” Fear blossomed anew. Although her photo ID looked real enough to her, it wouldn’t hold up to a police background check. She took a step back.

His eyebrows lifted slightly. “I saw you. Bring your purse up to the counter.”

Outrage swept through her, vying with anxiety. “I’m not stealing. Dante said I could take whatever I wanted to eat.”

“Mmmhmm.” Disbelief was obvious in the man’s deep voice. “Let’s ask him.”

Audrey crossed her arms over her chest, imitating the man. “He’s not here.”

When his gaze pinned her in place, she saw his eyes weren’t black—they were midnight blue and brimmed with skepticism. “He wouldn’t leave his store unattended.”

“He asked me to mind the register.”

“And steal the goods?”

“There are no sheriffs in Alaska. Call me Chief.”

“Chief.” Oh, she was so screwed. He wasn’t merely a small town cop, but the Chief of Police. She swallowed. Where was Dante? Shouldn’t he be back by now? “Chief what?”

“Juliette Wilson.” She’d done her homework. Wilson was almost as common as Jones, Johnson, and Smith. Juliette was a popular name, too.

“Wilson, huh?” His mouth flattened in a cynical way.

The door opened. As Dante moseyed into the store, relief filled her.

Only a few inches taller than she was, the wiry grocery store owner had receding white hair and a thick white mustache and beard.

He saw her, and his bushy brows pulled together. Turning to Gabe, he snapped, “Yo, buddy, leave my girl the fuck alone.”

When the chief turned toward him with a scowl, Dante blinked. His face lit. “It’s Gabe, isn’t it? I’ll be. You’re really here?”

The chief didn’t even notice Dante’s delight. “Ms. Wilson here was stuffing her purse with groceries and says you left her to mind the place.” The cop’s deep voice held enough sarcasm to fill a lake.

“Heh, working in LA done made you cynical, boy.” Dante might’ve left Oklahoma behind a long while back, but the southern twang in his voice remained.

“She told the truth?”

“Yep, she sho’nuff did.” Dante stepped behind the counter and set down a travel cup and white paper sack from the coffee shop. “She’s working now and then in exchange for one of my rental cabins and some groceries. Room and board, you might say. Keeps me from having to close up every time I want to leave the store.”

“I see.” The chief glanced at her, and his sharp gaze lingered on the yellowing bruises on her face. His suspicions didn’t appear much abated, although he said, politely enough, “I’m sorry to have bothered you, Ms. Wilson.”

“Quite all right. I can appreciate how guilty I must have appeared.” If she’d been a criminal, she’d be running from him as fast as possible.

To her relief, he nodded and joined Dante at the front.

After the two men shook hands, Dante glanced over. “Julie, how about you unpack those boxes of cereals?”

Yes, she totally needed something to keep her hands busy. “I would be delighted.”

“You shopping or walkin’ your beat,” Dante asked the chief.

“There’s no food in my cabin, but I’ll shop later.” The chief shrugged. “I wanted to see what I had to deal with here.”

“A lot, boy. A lot. Get yerself settled in and then we’ll talk.” Dante’s smile widened. “You might check on your brother across the street. There was a shit-ton of swearing coming from over there.”

Pretending not to listen, Audrey blinked. The man had a brother. There were two of them in this town. What an awful thought.

“No surprise. He hates paperwork.” The chief’s lips didn’t move, but the sun lines beside his eyes crinkled.

Oh. Dear God, the man would be lethal if he ever really smiled. She realized she was staring.

He noticed. His eyes narrowed, and his expression hardened. Even though Dante’s explanation should have placated the cop, he obviously didn’t trust her at all.

A chill washed through her, because she knew she must have looked guilty as hell. 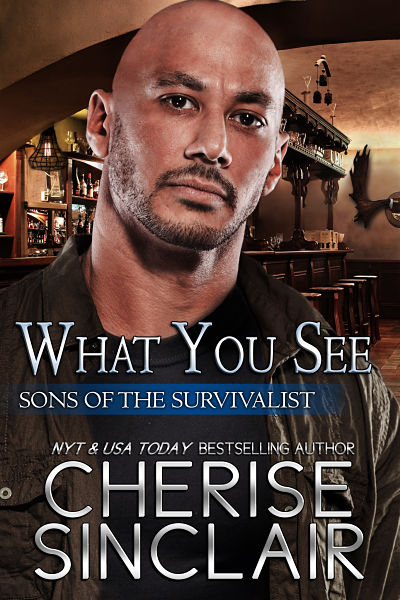 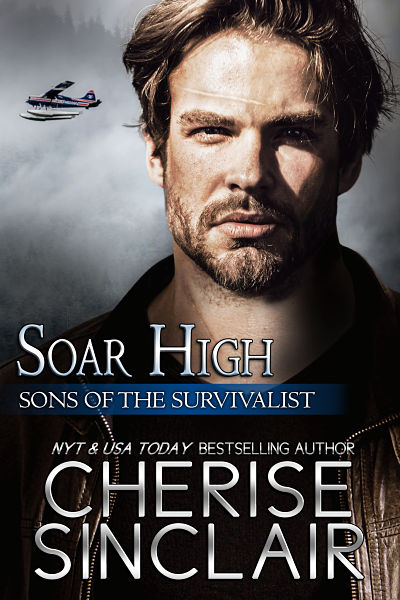 AMAZON AUDIO
AUDIBLE
iTUNES
We use cookies to ensure that we give you the best experience on our website. If you continue to use this site we will assume that you are happy with it.Ok