Leap of the Lion excerpt 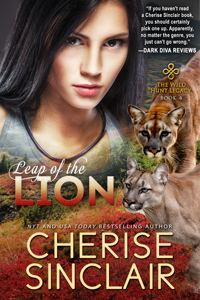 In the tiny mating clearing, the moon danced on the edge of the trees. The light wouldn’t last long, and wasn’t that a shame; Owen wanted to see the little female. It had been a long time since he’d truly enjoyed mating. But Darcy was special. Being with the little cat was…different…somehow.

He laid her down on the soft meadow grass and stretched out beside her, propping his head up on his hand. “You asked me a question.”

“I noticed you didn’t answer.” In the moonlight, her eyes were liquid pools of night. “You told me a female wouldn’t mate someone she disliked. But I bet males are different.”

Did she have any idea how appealing her clever mind was? “’Tis true males are less discriminating. He can mate someone he doesn’t particularly favor. In a way, we see it as our duty to the race.”

Her tiny sniff said she knew this would be the fact.

He grinned. “However, there is a wide gap between like and dislike. No male can rise for a female he hates.”

Her soft lips formed an O.

He ran the back of his knuckles over her softly curved cheek, feeling the increasing warmth. As he moved down, he found the pulse in her neck was delightfully rapid. Her collarbone gave him a path to her sternum and down to rest between her breasts.

She was holding her breath.

He gave her the honesty she’d asked for. “I like you, Darcy.”

At the release of her held breath, he smiled despite the ache in his chest. He was an ill-tempered weasel for making her doubt her appeal.

Awkwardly, he gave her the rest of the truth she was owed. “I was…poorly treated…as a cub and somehow figured all females were manipulative and self-centered. Since I’m gnome-stupid, it took me this long to realize not all females are the same.”

Her expression held compassion, and she stroked his shoulder in a way he enjoyed all too well. “I’m sorry you had such a rough time, and your mother was so cruel.”

She knew about his mother. By the God, the females had been gossiping about him. He started to pull back, then closed his eyes and wanted to groan. Aye, he was an idiot.

“Even knowing better, I keep seeing females as the enemy.” He laid his palm on the side of her face. “Please grab me by the tail and yank if you see me fall into the trap.”

He knew this female had the courage to tell him when he was messing up.

And now…after all the unkind words he’d given her, he owed her the good ones, as well. He stroked a finger over her lips. “I like your honesty—how you come right out and say what you want, what you’re feeling.”

Her startled look was a delight.

He trailed a finger down her pointed…stubborn…chin. “I like that you don’t cave in, and you have the courage to do what you think needs to be done.” He snorted. “Although the Cosantir might not be as appreciative.”

Before she could overthink his warning, he took her hand, kissing the callused fingers. “I like your talent with those human devices. Your delight in making something work reminds me of Gawain’s pleasure in a finely crafted blade.”

Whether with tools or lives, this little tinker tried to fix whatever was broken.

Ah, the smile had reached her eyes.

He put his hand between her lovely breasts. “Perhaps more than anything, I like your loyalty to your villagers and your brothers. Even when you’re afraid, you press on.”

Her lips were soft under his, and he took his fill before lifting his head long enough to whisper, “Yeah, I like you, Darcy.”

And he wanted her with a need that throbbed through him from his paws to his whiskers. His balls ached as if a gnome was squeezing them.

Still… He was going to take his time and enjoy every second he had with her. He kissed her cheek and nibbled on her jaw, under her ear, and down. The hollow at the base of her neck held her scent, the fresh green of oak moss after spring showers. He tasted between her small breasts, kissed the undersides, and licked over the puckered nipples.

She gasped, and her back arched up.

Nice. He could spend some time here. He licked around one nipple, then closed his lips around the peak and sucked. Nibbled, sucked.

Under his hand, her heart was beating violently against her sternum. Her moan made him smile.

He fondled her beautifully formed breasts, enjoying the firmness and the softness, feeling them swell until the skin was tight and the nipples long and pointed.

“Please. Please, Owen, I need more.” She tugged on his hair, interrupting his play, and reminding him of his duty. In the moonlight, her dark eyes met his straightforwardly.

And he realized this one night wasn’t going to be enough for him. He hadn’t lied to her…he did like her, and he would want her even when the moon wasn’t full. It might be fun to mate a female not influenced by the full moon heat. A female—this female. “All right, little cat.”

His lips twitched. Fuck, she was cute. “No, you’re definitely full grown.” And he would thank the Mother for the gift of her. “And I’ll give you more.”

But, rather than impaling her on his cock as she’d obviously hoped, he moved down. As he licked her belly, he was pleased to see her ribs were now hidden under beautifully soft flesh. When he rubbed his chin on the crease between her thigh and pelvis, she inhaled sharply and her hips started to rise.

“Oh, none of that now,” he murmured, breathing her in. Her fragrance here was richer, more sensual, redolent with her excitement. Under his hands, she was almost quivering. “You’ll have more fun if we take our time.”

“You-you dumb dumbass, I don’t want to go slow. Take me, dammit.” Her voice—he did love her sultry voice. Instead of her tone rising to shrill, her cute demands were even more throaty than usual. The smoky sound laced around his heart.

He ran his hands up and down her legs before settling between her soft thighs. “I will. When I’m ready.” Smiling, he teased his tongue over her pussy, savoring the musky taste of her—and silencing her completely.

Her hips squirmed enough that he ruthlessly pinned her down. Wasn’t it nice his cahir’s hands were so big he could hold her in place as well as use his thumbs to part her folds?

The moonlight showed the sweet nub of nerves was swollen and ready for his tongue. He puffed a warm breath over it—and she jolted upward. She’d need a light touch.

Using just the tip of his tongue, he teased around the nub, wanting to bring his fingers into play, as well. However, new to mating, she would be tender inside.

Instead, he’d tease her in a different area.

Mother of All, every drag of Owen’s tongue sent her higher. Oh, she needed more, wanted him to take her.

Her clit was impossibly sensitive and so swollen it throbbed. Nothing had ever felt so good, if only he’d let her come. Why didn’t he let her come? Just a tiny extra…

He moved a hand down and her breath caught as she waited for him to touch her pussy, to enter her. His hand slid lower, and he slid a finger between her buttocks.

She stiffened. “What…?” She felt his finger circle her anus. “Not there.”

His lips closed around her clit—and his laugh vibrated through the exquisitely sensitive nub until nothing else registered. Then his finger moved again right there, engulfing her in strange tingling sensations that somehow only added to what she felt from the front.

He licked around her clit, and his finger circled back there, and a clawing need rolled through her in an entirely new way. Oh, oh, oh.

As he sucked in teasing pulls on her clit, the pressure at her core increased until she trembled on the precipice. Every nerve in her lower half was awake and needy.

Go to Leap of the Lion book page & buy links