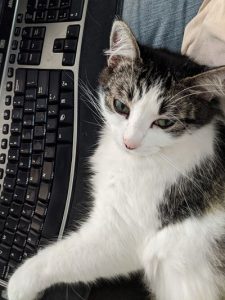 What's going on in the writing cave?

It's coming!  I'm so excited to bring you Bull's story in the Sons of the Survivalist series.  What You See will release on December 8th.

Bull is such an amazing mix of huge and gentle–and deadly.  He'll get to prove that to y'all in the story.  I'll admit, I was having trouble writing during this time. So I ended up giving him a dog (everything's better with a furbaby, right?).  Some of you have been worried about Hawk. He'll get his book after the next Shadowlands–and Bull's story will give you an idea of what he's going to be facing.  Poor Hawk.

Next, I'm plotting out a story for Ghost in the Shadowlands. He's the security guard who mostly took Ben's place in the club. Older, retired military Special Forces, and a sadist.  And he's in a grumpy mood since I've made him wait so long for his book. (Note to y'all: annoying sadists is not the secret to a pain-free life).

Audiobooks: Eventide of the Bear in the Wild Hunt Legacy is finished and out (yay, Noah & Erin), and they're contracted for Leap of the Lion.

Gunnar Qualen and Jenna St. Claire have just finished narrating Lethal Balance in the Sons of the Survivalist series, and it should be released sometime in November. (Caz's voice is mmmhmm sexy).

During this time, my DH and I visited the animal shelter and brought home a li'l rescue kitteh. (Yes, that's her in the pic). She decided she needed to lend a paw with the writing of all future stories to ensure adequate representation of any furbabies.

Hugs to you all with hopes that you are staying safe and well,
~ Cherise